The fairytale has become reality!!

A Hobbit Bed & Breakfast in Sweden.

Have you read and marveled at "Lord of the Rings"? Now you can live the story. Stay over night in a real Hobbit house!

Experience a life as a Hobbit, relax in peace and quiet at the fireplace, enjoy the first and second breakfast.

Who has not seen the "Lord of the Rings" films without a little extra cozy feeling just when there are scenes from Fylke, the Land of the Hobbits. We have created a Bed & Breakfast inspired by Tolkien and other storytellers. A place where you can unwind after a full day in the buzy streets of Stockholm.

Everything started with an idea that our slope in our frontyard would be perfect for a Hobbit house ..... but why stop there. When it was allowed to build "attefallshus" we decided to build our dream house and open a Bed & Breakfast. In the winter of 2014, the building permit applications were sent to the building permit unit, after 8 months and three times in the building committee we finally got the start notice. In the autumn of 2015 construction began.

In March 2016, work on the foundation and walls, this was in place just before the concrete truck came and poured the roof mid April 2016. The work on the front side including log and door was completed in August 2016, bricklaying of the fireplace and chimney before the soil and grass ended up in place. When finally windows and brick facade were in place, the outside was finished (November 2016). Now the job started with the inside, it took until May 2017. Now we could open our

Bed & Breakfast ..... and the result was better than expected!

Come and visit us, warmly welcome 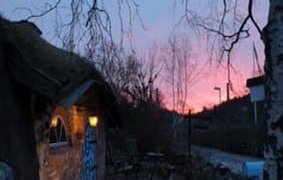 Our offers and activites 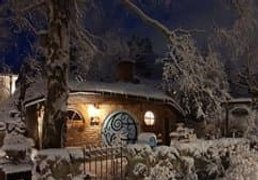 The house is only 22 sqm but has everything you need 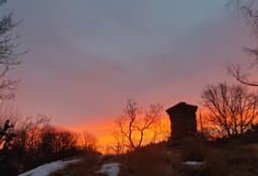 How to find us

HOW TO GET HERE

Let fairytal become a reality.
Stay in a real Hobbithouse

RoundDoor B&B is run by the

Sandell family,
Jennie and Fredrik and their daughters Alva and Agnes